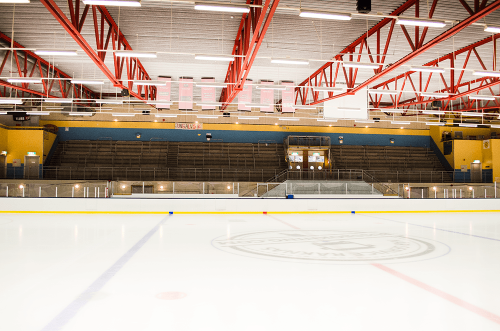 Kungälv is a little town with almost 16,000 inhabitants, situated outside of Gothenburg. Even though it is a small town, they have an exorbitantly big interest in sports. Oasens ice rink is located in the heart of the town and was opened in the autumn of 1995.

Oasens ice rink is unique, it has ice in the rink 365 days of the year. The ice rink is being used by different sports teams and schools for figure skating, ice hockey and ice skating. These various activities are taking place from early morning until late in the evening. This contributes to a high pressure on the ice rink, and a good climate is a must for keeping the hall and ice at a good quality.

If an ice rink doesn’t get dehumidified condensation can form, often on the ceiling where it’s cold. Then it can drip down on the ice which causes indentations and a poor-quality ice surface. Moisture can cause products such as steel to rust and the equipment not to dry properly. When a non-dehumidified hall is filled with an audience fogging can occur, which both greatly affects the indoor climate and makes it hard to see well. The main problem with Oasens ice rink was that condensation formed on the plexiglass around the rink and their equipment did not dry. They also had problems with extra moisture in the hall during events when the number of spectators in attendance was around 7,500. They wanted a solution that gave them a good environment with low energy costs.

Fuktbehandling AB had the honor to deliver a Seibu Giken DST dehumidifier during the summer of 2016 which solved their moisture and ventilation problems. The unit is a custom made Flexisorb unit that will regulate both the moisture and the ventilation at the hall. The moisture is controlled via the dew point, which means that the humidity in the hall is kept so that condensation will never occur. The air quality is continuously measured so that the unit knows if it should let in more or less fresh air.